A researcher at Oregon State University discovered an ancient species of fly (order: Diptera) that was found embedded in a piece of amber dating back over 100 million years old. What makes this fly so special is that it is a new species, genus and family of insect that has never before been observed. The most fascinating aspect of this discovery is that the fly has FIVE eyes and a HORN, which is equipped with three of the eyes. Talk about an unusual ancient monster! The new species is called Cascoplecia insolitis, which is roughly translated as “old and unusual”. This unusual fly lived in the jungles of Myanmar (also known as Burma) over 100 million years ago and despite its ferocious look is thought to be a docile little creature that fed on the pollen and nectar of tiny flowers. The three eyes on top of its horn would have given it the ability to see predators coming while it was nibbling on its food. Read more here. 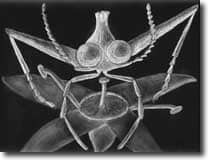 Ant of the Month Insect Wallpaper