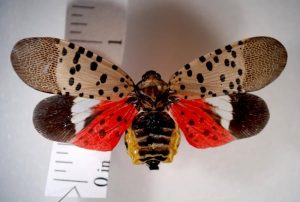 The Spotted Lanternfly (Lycorma delicatula) has landed in the United States for the first time. Although it’s beauty is eye catching, this beautiful bug is really an invasive pest that is currently threatening Pennsylvania.

The Spotted Lanterfly is originally from China, India, Japan and Vietnam, where it has natural predators that keeps its populations in check. Its arrival in the United States is causing concern to fruit and grape growers because this insect sucks plant sap and can causes withering of the whole trees it attacks.

In Korea, where it has recently invaded, it has devastated fruit trees and has caused widespread economic damage. Pennsylvania has grape and fruit industries at stake that generate more than $20.5 million in grape, $134 million in apple, and $24 million stone fruit production. The state has set up a quarantine and raising awareness of this potentially damaging invasive bug. In the United States, invasive species cause billions of dollars of damage every year.

We feel it would be better served in a framed lantern fly display and not attacking our nations fruit industries.