What Is the Oldest Known Insect?

Insects are old. Like really old. According to phylogenetic data, the first group of insects emerged about 479 million years ago during the Early Devonian Period. This makes insects older than dinosaurs and most other currently living organisms.

Naturally, though, this leads to the question; What is the oldest known insect?

The title of the oldest known insect goes to Rhyniognatha hirsti, which was first discovered in 1919 in Aberdeenshire, Scotland by a man named Reverend W. Cran.  Cran discovered the head part of a specimen in a layer of Denovian sedimentary rock and donated it to entomologists S. Hirst, S Maulik, and D.J. Scourfield.

Rhyniognatha hirsti has been dated to nearly 410 million years ago, making it the oldest known definitive insect specimen in existence. While it is possible and very likely that insects existed before this time, we do not have any fossil evidence of them.

In 2004, entomologists Michael S Engel and David A. Grimaldi analyzed the specimen and determined that R. hirsti likely had wings and bears a close resemblance to modern-day silverfish. However, there is some debate on the matter as other entomologists have concluded that R. hirsti was actually a type of myriapod, a group of arthropods that include centipedes and millipedes.

While details are sparse, scientists have determined that R. hirsti likely fed on the spore-producing organs of sporophyll plants. Scientists also believe that R. hirsti’s large mandibles may have been used for hunting.

Of course, R. hirsti has long-been extinct and it is not clear where in insect taxonomy it falls. So that leaves us wondering, what is the oldest insect species that is still in existence?

This is a hard question to answer as insect species have evolved dramatically over time and modern extant species may be very different from their ancestors.  It is also hard to determine when, exactly, a novel species has definitively diverged from a common ancestor.

However, a tentative answer to the oldest extant insect species may be Martialis heureka, a species of ant discovered in Brazil in 2008. 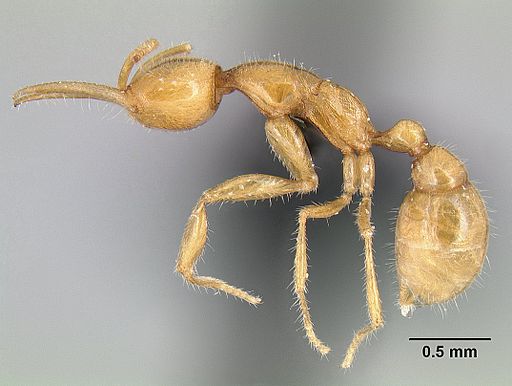 M. heureka is believed to have first diverged nearly 120 million years ago and has remained relatively unchanged since then. M. heureka are blind and live in subterranean caverns and only emerge to feed during the night. They were originally called Martialis after the planet Mars, as an allusion to their strange and unique appearance.

Home / What Is the Oldest Known Insect?